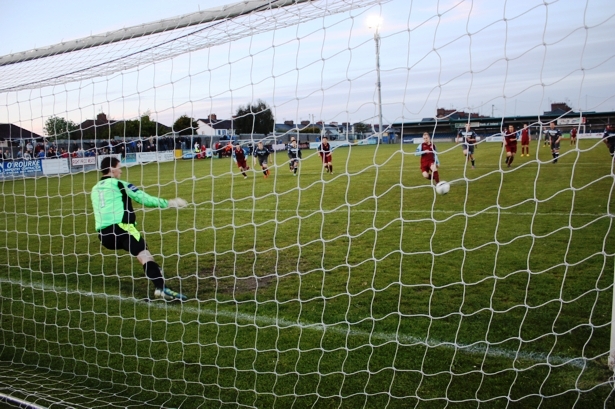 Cobh Ramblers went down 1-2 to Salthill Devon despite a spirited performance at St. Colman’s Park on Friday night. Two Enda Curran goals late in the first half were enough to give Salthill their first win of the season and move them to within five points of Ramblers at the bottom of the First Division table.

Ramblers started the game confidently at a sundrenched St. Colman’s Park, despite missing two of their star performers, with top-scorer Conor Meade and Brian Fitzgerald both unavailable.

The back four was boosted by the return of captain John Meade but the defence had little to do for the opening half hour with the Claret and Blues pinning the visitors inside their own half.

Adam Thompson and Kynan Rocks were combining well down the right flank and the first chance came when Rocks won a corner on the right and Roy Kenny played it short to Andrew Bhandarkar but his deep cross was headed wide by Davin O’Neill.

Ramblers were getting the ball out wide to Rocks as often as possible and the winger was involved again when he played in Jonathan Spillane down the right but his teasing cross towards strike partner O’Neill was well cleared.

The young Cobh side were playing some great football with centre midfielders, Bhandarkar and Roy Kenny spreading the ball wide as often as possible to Rocks on the right and Martin Deady on the left.

Deady was next to create a chance when he pounced on a slip from Robbie Gaul on the touchline and whipped a cross in for O’Neill but his scuffed effort was easily saved.

The next chance fell to Rocks as the home side were really beginning to build up a head of steam but his dipping volley from the edge of the box was just too high.

It took until the 27th minute for Salthill to muster their first effort with a speculative quick free-kick from Curran flying wide much to the relief of the scrambling goalkeeper Robert Birdsall.

Ramblers continued to dominate but the longer the game remained scoreless, the more Salthill grew in confidence and Curran gave them the lead against the run of play in the 43rd minute.

The goal came from a great move started by Gaul who brought the ball forward from right back before playing it infield to Willie Enubele who fed Craig Harding on the right wing and Harding’s low ball found the unmarked Curran who slotted past the despairing dive of Robert Birdsall.

The goal was a body blow for Ramblers who had played so well up to that point, but things were to get worse in stoppage time at the end of the half. A hopeful punt upfield from Salthill’s Jamie McGlynn bounced right through the middle of the Cobh defence and into the path of Curran, who easily lobbed Birdsall to give the visitors a scarcely deserved 0-2 half-time lead.

The home side began the second half slowly, understandably shell-shocked by the two quick-fire goals, but as the game wore on they began to create chances. First, O’Neill curled a free-kick just over the bar and then the same player took the ball around the Salthill goalkeeper but his shot from an acute angle was cleared. Spillane then headed just over from a Cian Murphy cross as the Ramblers grew in confidence.

With 25 minutes remaining, Rocks appeared to be dragged down just inside the box but the referee waved away the penalty appeals and it looked like it just wasn’t to be Ramblers’ day, but hope was renewed with ten minutes remaining when Salthill’s Graham Kelly was given his marching orders after a second yellow card.

This reinvigorated the home side and they were awarded a penalty three minutes later when Bhandarkar played Deady in behind the visitor’s defence and James Keane came rushing from the Salthill goal to clumsily foul the winger and the referee pointed to the spot. Deady himself calmly sent the keeper the wrong way to put Ramblers back in the game.

After that, the expected siege never really materialised with the Galwegians seeing out the remaining time quite comfortably for their first away points of the season, extending Cobh’s winless run to six matches.

Next up for Ramblers is a trip to Dublin to face Leinster Senior League side St Patrick’s CY in the second round of the FAI Cup next Saturday, the next home game is the big Munster derby against Waterford United on Saturday the 15th of June.