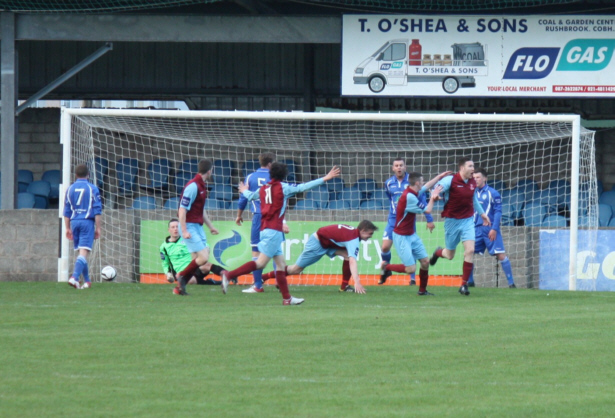 St. Colman’s Park has been the place to be this season if it’s goals you’re after, and it didn’t disappoint on Saturday evening as Cobh Ramblers and Finn Harps played out a 2-2 draw in the Airtricity League First Division.

Cobh struck first blood through Brian Fitzgerald, before Kevin McHugh equalised for the visitors. Davin O’Neill immediately pulled one back, but Sean McCarron struck late to secure a point for the Harps.

The result will undoubtedly frustrate Ramblers boss Dave Hill, given that points are needed in their bid to rise up the league table and the concession of a lead on two separate occasions is not acceptable.

Finn Harps will undoubtedly see it as a good result however, especially as they were forced to travel the length of the country to actually partake in the match.

What was a young Cobh side that featured six U19 players coped well with their more experienced adversaries, as they played out an even encounter with not a whole lot between the two teams.

The game got off to quite a slow start, with authentic chances few and far between. The first attempt on target went to Finn Harps, when Robert Birdsall comfortably saved Kevin McHugh’s curled free kick.

Seven minutes later, Cobh had taken the lead against the run of play. Martin Deady whipped in a corner kick from the right side, which big centre-back Brian Fitzgerald rose highest to head in.

Despite holding the advantage the hosts were second best for long spells on the night, and the visitors came very close to getting back on level terms on the half-hour mark, but the at times heroic Fitzgerald got across in time to block Johnny Bonner’s goal bound shot.

Minutes before the break, Ramblers themselves failed to double their advantage. Davin O’Neill showed his class with an inch perfect pass to Conor Meade, who cut it back to 17 year-old Kynan Rocks – who fired over.

Right after the restart, the Harps had gotten themselves back into the game. Johnny Bonner crossed the ball in from the left wing, which Kevin McHugh steered in with his head. A goal identical to the first.

Seconds had elapsed when the home side got their noses back in front however. Again it was the quality of Davin O’Neill that proved decisive – the former Cork City man calmly side-footed a ball that was swung from the right side into the back of the net, under virtually no pressure at all.

The away side had come all the way from Donegal for the clash (the longest trip in the League of Ireland) and refused to cave in. Early signs did not bode well however, and their next chance came seven minutes later when Sean McCarron blazed a shot wide of the target in anger.

With 54 minutes of the clock came the best chance of the game that didn’t find the net. Kevin McHugh found himself bearing down on goal once again, but this time didn’t have the guile to put it away and snatched wide.

Finn Harps finally found the equaliser they had been looking for with 14 minutes of normal time remaining, and not many neutral spectators could deny that they’d earned it. The game had been lacking a delicate touch, epitomised in the goal – Sean McCarron simply smashed it into the net from outside the box.

The match seemed to have found its fair result, but that didn’t stop Cobh from pouring forward in an attempt to steal all three points. The last swansong came in the 93rd minute, when substitute Danny Aherne blazed over the bar from the edge of the area.

ExtraTime.ie Man of the Match: Brian Fitzgerald (Cobh Ramblers) – He opened the scoring on the night, and was imperious at the back. Marshalled a very solid looking Cobh defence.