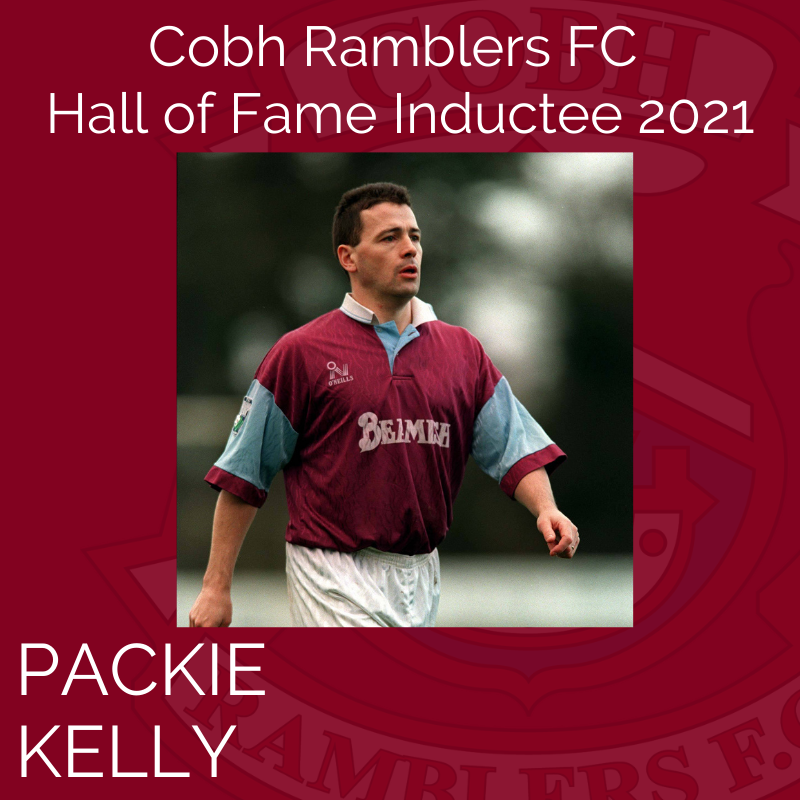 The last time we stood on the Ramblers clubhouse podium by way of inducting another player to the Cobh Ramblers Hall of Fame, was back in November 2019, when the inductee was arguably the finest left-back to don the Claret & Blue, the late George Wilshaw. In keeping with a defensive formation, but switching to the opposite side, in 2021 we honoured arguably the best right back to play for Cobh Ramblers, Packie Kelly.

In sport the word arguably is invariably included, because depending on your age bracket, opinions will vary. In the case of Packie Kelly, it is fair to say that we will not see his likes again. A local, loyal and faithful servant who amassed the quite staggering total of 435 (3 goals) senior games played, from a debut game in the mud of Belgium Park, then home to Monaghan United, on 15th February, 1987, to the calling of time for his final appearance at home to Dundalk on 12th May, 2001.

In my lifetime and for those of the generations that followed, that record number of games will stand the test of time and remain a salutary reminder to the name of the player who made them – Packie Kelly. A native son of Cobh, he also excelled at Gaelic football with medals won at both local and county level. But soccer was his chosen sport going forward, graduating from Springfield with League success at U16 and captaining what at the time was the last Springfield Youth team, to a League and Coca-Cola ‘Double’ in 1985.

The natural progression was to join Cobh Ramblers. Many hours of soul searching followed on from his LOI bow (alongside him that day on the bench in Monaghan and also making his debut was his first cousin, Michael McDonnell), because it would be a further three seasons before Packie would establish himself at that level, in the right full-back position that he would have copyright claims on thereafter. He has shared the same dressing room with countless players, focusing no doubt on their character and individual characteristics, clocking up the miles in the discomfort associated with all away bus trips, served under eight different managers. Packie himself, and Stephen O’Mahony, took the team for a two game duration, in between managers, in season 2000/01.

That any player could amass such playing statistics that amounted to an almost unbroken sequence of games played from season to season, owes so much to a supreme level of fitness and avoidance of any niggly or more serious injury. In that regard, Packie Kelly was blessed with good fortune. Along the way he has collected a number of individual awards, those that marked the ever-increasing milestone of games played, his Player of the Year awards, his Cobh Pirates award for soccer in March 1993, received from the then Tánaiste, Dick Spring. There were emotion filled days/nights along the way with promotion achieved in 1993, and a play-off victory over Finn Harps at the end of the following season to stay in the Premier Division. But his biggest regret still has to be that in the longevity of his playing career he had no senior winner’s medal in his possession. Two losing Munster Cup Finals, in 1994 and 2000, both to Cork City, and at national level the closest was perhaps the Shield Final loss over two legs to Home Farm in March 1998.

Upon leaving Cobh Ramblers he played a further 61 games (2 goals) for Cobh Wanderers before a final curtain call on a great playing career. For Packie Kelly then it was a case of impartin the knowledge he had acquired down the years in a coaching capacity. He first served as assistant manager to Eddie O’Halloran at U15/U18 level, and afterwards with Brian O’Rourke at Springfield Ramblers.

In Packie we are honouring one who persevered when he could have stepped away, and is the foremost example in this town as to what can be achieved when ability is allied to hard work and application. Footballers can make for splendid heroes, Packie Kelly has always been a symbol of all that is fine on the sporting field of endeavour. Tough but fair, popular with fans and playing colleagues alike, but who’s engagingly modest personality has invariably shunned the spotlight.