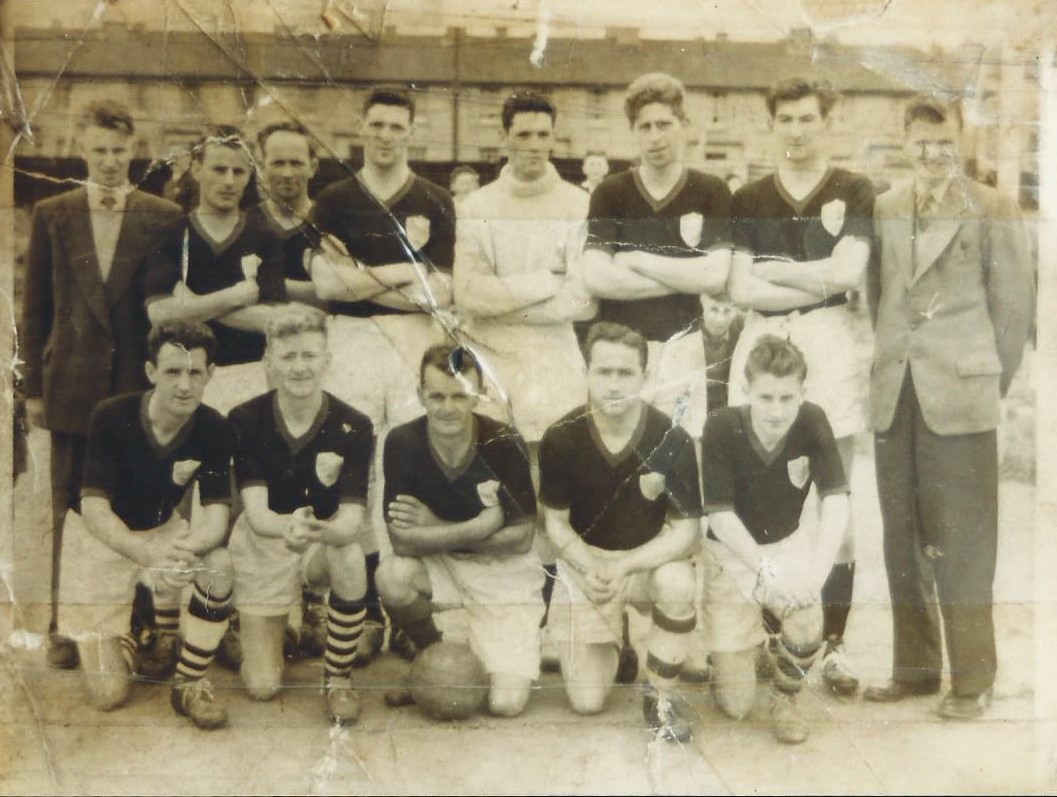 Cobh Ramblers FC wish to extend our sympathies to the family and friends of our late former player Michael Anderson following his recent passing. The following tribute by club president Michael Geasley reflects on the career of another fine Rambler who served our club so well.

The name of Michael Anderson is afforded a special place in the history of Cobh Ramblers as a three times capped Junior International for the Republic of Ireland. One of those caps was against England at Dalymount Park (2/4/1956), a game which the Irish side won 1-0. At 19, his star was on the rise.

The footballing dialect of the day would list Michael Anderson’s position on the field of play as that of an inside-right. His transition from Minor to the Senior ranks of Cobh Ramblers, coincided with that cycle in football of a great side coming together, for many in terms of sheer ability the greatest
ever to don the Claret & Blue. That same cycle of not having won a MSL title in 14 long seasons, was broken in 1956/57 with a treble of League, Elvery and Foley Cups won. The crowning glory would surely be an Intermediate Cup, and they seemed well on their way to the final leading Albert Rovers
3-0 in a re-fixed semi-final in Cobh – the oraiginal game at 2-2 was abandoned because of adverse weather conditions. The magic of Joey O’Halloran’s two goals had powered Ramblers into what looked like an unassailable lead, but legitimate or otherwise, given that it was allowed back then,

Ramblers’ goalkeeper John Harvey was barged, ball in hand, over his own goal line on three separate occasions and Alberts had staged a remarkable recovery to win 4-5. Of little consolation was the fact that Alberts brought the Cup back to Cork for a second time. Controversary also surrounded the 1st Round FAI Cup game in Sligo that same 1957/58 season, when against the rules of a corner-kick being played twice by the taker – the original kick had come back to him via the crossbar – and his subsequent cross lead to the goal that put the home side through on a 2-1 score line.

Two wise men of soccer, Dave Stack and Moss Cummins, were at the helm for Ramblers back then. The comraderie of playing with Ramblers was divided, when players lined out on opposing side, that was the parochial nature of the District Leagues. The 1958 Final and pairing of Quarry Cocks (Top of the Hill) and Glenanaar was no different. An early penalty for Quarry Cocks put Michael Anderson centre stage. No problem, he took them for Ramblers. There was just about enough time for Johnny Sillett to give goalkeeper John Harvey a quick coaching lesson, having studied Anderson’s
preferred side (he was right-footed), and Harvey followed instructions and saved the kick. Michael Anderson for a split second and in the heat of battle, lost his self-dignity in uttering a few non complimentary words in the direction of Sillett, who in typical Sillett like fashion had the last laugh,
as he plundered two second-half goals and won for his Glenanaar side the local bragging rights.

As the fifties gave way to the sixties, that ultimate glory of triumph was denied to Ramblers, and so the cycle began again. But in players such as Tommy Foster, Leslie Lane, Jim Burke, Paddy Devlin, Joe “Sonny” Gibson, Johnny Sillett, Joey O’Halloran, and now Michael Anderson, all sadly departed, who were to the forefront of that era in adding another chapter to the history of the club, and we can only hope that the passage of time will never diminish or forget the role that they played.

May he rest in peace.