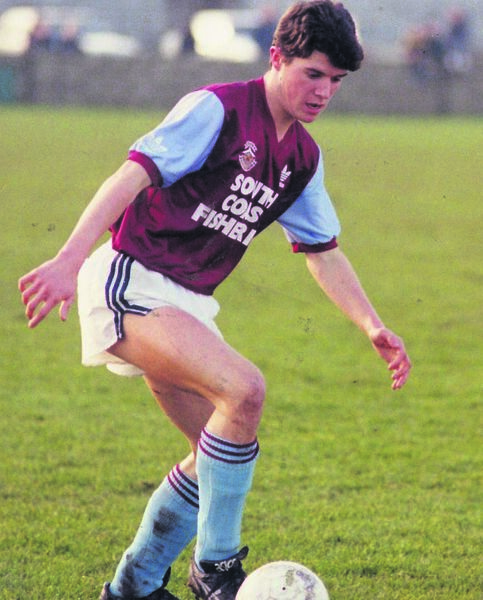 As part of Cobh Ramblers’ Centenary celebrations in 2022, at our Centenary Dinner Dance on November 25th, the club will be inducting three Ramblers legends into our Hall of Fame. Today we can announce that the first of our inductees will be the man who is quite possibly the most famous player to wear the Claret and Blue, Roy Keane.

Roy’s arrival at Ramblers owes its occurrence to the establishment of the inaugural FAI FÁS Youth Scheme in 1989, a joint programme between the Irish government and the FAI. Each League of Ireland side was invited to send one young player on the course, and a good friend of Roy’s, Len Downey, had informed him that Cork City were sending him on their course as their representative. Roy had just signed a form committing to Cork City and, knowing that Cork’s spot on the FÁS course was gone, he was left distraught. Ramblers youth coach Eddie O’Rourke contacted Roy the day after he had signed for City, to see if he would be interested in joining Cobh. Eddie was well-aware of Keane’s talents from the youngster’s Rockmount days and knew he would be a beneficial addition to the club.

Eddie was unaware that Roy had joined Cork just the day previous. Determined to get his man, O’Rourke rang the FAI to see if his registration had gone through. Cork City had held off on sending the form in order to send Roy’s with that of another a few days later. With Roy assured of Ramblers’ spot on the FÁS course the deal was done and Ramblers sent the
transfer form to the FAI in Dublin by express post.

His Cobh senior debut came on August 13th 1989 in Buckley Park as the Rams went down 2-0 to Kilkenny City in the Opel League Cup. First team manager Liam McMahon gave Roy his league debut on November 5th that year, in a 2-1 victory over Bray. That season he would make 29 senior appearances as Cobh finished seventh. His two goals came against St Francis and Finn Harps.

While Roy was heavily involved with the first team during that 1989/90 season, he remained eligible for O’Rourke’s U18 side who had made excellent progress in that season’s U18 National Cup. Belvedere had been drawn at home in the quarter-finals, with the replay taking place on February 18th in the Capital. A disappointing 4-0 loss for Ramblers was tough to take but after the game chairman John O’Rourke informed young Keane that Nottingham Forest scout Noel McCabe was at the game and had been impressed enough with his performance in the middle of the park, in spite of the result, to invite Roy on a trial. After two trials Brian Clough had seen enough to merit signing the Mayfield man and negotiations with Ramblers commenced.

John O’Rourke and John Meade led the Cobh delegation during the talks. Given the club’s limited knowledge in such an area they were assisted by former Chelsea player and manager John Hollins, who was experienced in such transfer dealings. With negotiations complete Roy left Cobh in the summer of 1990.

While Roy went on to become a global superstar and a serial winner, he never forgot his Ramblers roots and remains a familiar face at St Colman’s Park to this day. His contribution to our fundraising efforts over the years cannot be understated. In 2004 Roy brought Manchester United to a sold-out Turners Cross to face Cobh Ramblers. Four years later, as manager, he brought his Sunderland side to Cork for another friendly. In 2017, Roy was once again on hand to help raise funds for the club, when the Silversprings Hotel played host to an ‘Audience with Roy Keane’.

While Roy’s time on the pitch with us was short, he has always remained a Rambler and the support and guidance he has continued to offer to the club has not been forgotten. At our Centenary Year Dinner Dance, on Friday 25th November, it will be our great honour to welcome into the Cobh Ramblers Hall of Fame, the one and only Roy Keane.

If you would like to join us at our celebration of Cobh Ramblers, tickets are on sale via Cobh Ramblers Club Office as well as online via
https://www.klubfunder.com/Clubs/Cobh_Ramblers_FC