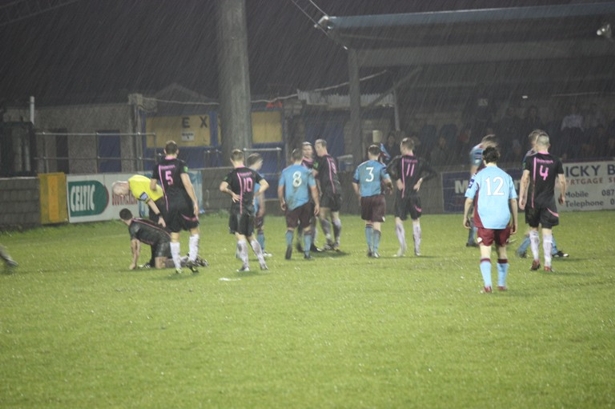 An estimated crowd of 800 footballing supporters saw Ramblers start this exciting fixture very brightly with Conor Meade and Martin Deady forcing early saves from Wexford keeper Graham Doyle. It was Meade who opened the scoring on 15 minutes when Deady ran to the byline and passed it to the former Avondale man. He neatly tucked it into the far corner.

Davin O’Neill almost found the net with a fierce free kick, but it was just turned over the bar. Ramblers doubled their lead on 32 minutes, when a Deady corner found Alan O’Flynn and ex-Midleton man headed home to make it 2-0.

It was 3-0 two minutes later as Deady ran through on goal and found the back of the net. Youths were clearly stunned and it wasn’t long before Meade added his second, five minutes before half time. A failed clearance by goalkeeper Doyle rebounded off Meade and bounced into the net. The home fans could not have been happier going into the break.

The weather deteriorated in the second half with heavy rain and Wexford got more into the game with forwards Aidan Keenan and Dean Broaders producing fine saves from the Ramblers netminder Robert Birdsall. The game started to slow down as the rain got heavier. The Ramblers, defence especially Gary Collins and captain John Meade stood strong to everything that Wexford threw at them. In midfield, Mikey O’Shea and Andrew Bhandarkar controlled the play well. Conor Meade came close to scoring his third but his effort just missed the target. Jonathon Spillane wrapped up the scoring on 88 minutes when his neat finish made it 5-0.

The Ramblers fans definitely went home happy after the game. A great team performance along with a superb atmosphere made for a very entertaining night. Its great to see League of Ireland football back at St. Colman’s Park and the attendance tonight showed how much it means to the people of Cobh. Ramblers are top of the table after the first round of games level on points and goal difference, with Longford Town.

Cobh Ramblers’ next fixture is Monday night away to Waterford United in the EA Sports Cup and the next home game is Saturday March 30th against Longford Town with a 7.45 kick-off