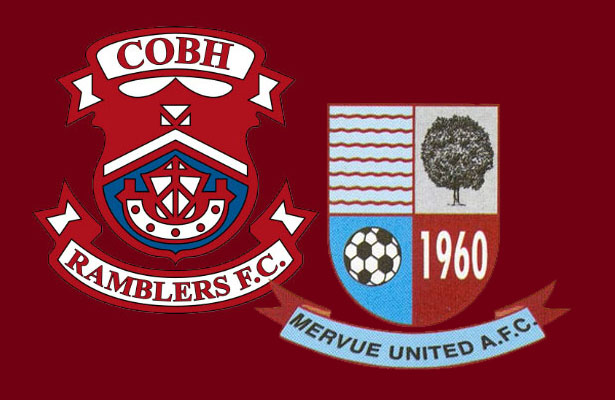 Ramblers were two up through goals from strike duo Kynan Rocks and Davin O’Neill with Mervue levelling after two Ryan Manning penalties but Deady won it for Cobh late on after a mix up in the visitors’ defence.

The last time Mervue visited Cobh they were beaten 5-3 in one of the most incident filled games you are ever likely to see and St. Colman’s Park hosted another entertaining affair last night.

Hill made five changes to the side who disappointingly lost that fixture with Shane Barrett, Davin O’Neill, Robbie Waters, Sean O’Mahony and Roy Kenny coming into the starting 11.

Mervue were unbeaten in four going into the match and started confidently but the first chance didn’t arrive until the 16th minute when Mervue’s Stephen Walsh broke through the Cobh defence with keeper Shane Hallahan alert enough to tackle the advancing striker and clear the danger.

Cobh were sitting far too deep with the visitors dominating possession and Manning was allowed to shoot straight at Hallahan before Jason Molloy dragged his shot wide as Mervue threatened.

Just past the half hour the Galway side had their best chance when the overworked Hallahan could only punch a Manning corner as far as Martin Connelly at the edge of the box but the defender’s weak effort was easily gathered by the keeper.

As half-time approached, Ramblers would have been happy to reach the dressing room on level terms but they went one better when the impressive Rob Waters played in Rocks and the young striker showed great speed and strength to hold off Paul Sinnott before slipping the ball past Mervue keeper Conor Gleeson.

It was Ramblers first chance of the game and it was clinically taken by the tricky attacker for his second goal of the season.

The goal energised Ramblers and O’Neill was wide of the mark with two headers just before the break as Dave Hill’s side looked to add to their unlikely lead.

Mervue began the second half brightly and Brendan Frahill had to be alert to cut out the danger after Walsh got in behind the Cobh defence early on and Hallahan was kept busy as he saved Manning’s low effort after Walsh’s cross from the left.

Just as Mervue started to crank up the pressure, Ramblers hit them with a second sucker punch in the 55th minute as O’Neill tapped in to make it 2-0.

Right-back O’Mahony played a big part in setting up the goal as he intercepted a poor headed pass before advancing forward and although he was dispossessed, Rocks managed to win the ball back inside the box and he showed excellent awareness to unselfishly square for O’Neill to gratefully tap the ball home.

The second goal settled Ramblers and they nearly made it three when Deady fed O’Neill on the edge of the box and the former Cork City striker feinted before curling the ball towards the far corner but Gleeson was equal to the effort.

Cobh looked solid at the back with Brendan Frahill in particular impressing but the visitors were allowed a way back into the game when Roy Kenny fouled Marc Ludden in the box and Manning sent Hallahan the wrong way to make it 2-1.

Deady had a long range free-kick clawed away as Ramblers looked to restore their two goal lead but Mervue won another penalty with just five minutes remaining.

The penalty was awarded when Hallahan could only palm Walsh’s shot into the body of Frahill with referee Simon Rogers harshly deciding that Frahill had handled.

Manning slammed the penalty into the bottom right corner to make it 2-2 with the striker eager to retrieve the ball as the visitors sensed a winner.

Both sides had chances as they pushed for a decisive third goal and in the first of the five minutes added for injury time, Deady won it for Ramblers with his seventh strike of the season.

The goal was laid on by O’Neill whose cushioned header caused chaos in the Mervue defence with an attempted clearance striking Deady in the face and rolling into the net to secure another memorable win for Ramblers.