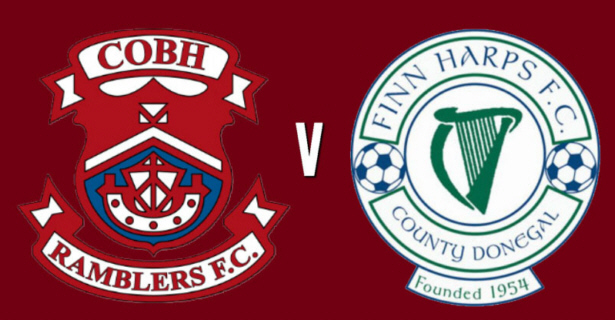 Revenge was the order of the day as Dave Hill’s side had been knocked out of the FAI Cup by Harps on Monday night and the win moves Cobh nine points ahead of bottom-placed Salthill Devon and just two points behind Harps and Wexford Youths in the battle for fifth place in the league.
Both sides made numerous changes from the cup match earlier in the week with Robert Birdsall, Eoin Hastings, Graham McCarthy, Robbie Waters, Bobbi Donoghue and Ronan Stanton starting for Cobh Ramblers. It was a special occasion for Cobh captain John Meade as he made his 200th appearance for the side.

The big omission for the Donegal men was Kevin McHugh – the striker scored in both of the recent cup clashes between the sides – and Peter Hutton made nine changes with Damien McNulty, Aaron O’Hagan, Marty Owens, Shane McGinty, Pat McCann,Michael Doherty, Thomas Bonner, Paul McVeigh and Gary Merritt coming into the side.

The visitors opened the scoring within a minute when Paul McVeigh fired in a low cross from the right allowing Pat McCann to side-foot home with the home side caught napping. But former Cork City striker Davin O’Neill made it 1-1 in the 13th minute when he scored from the penalty spot after Kynan Rocks was clumsily taken down in the box.

But Peter Hutton’s side were back in front after 21 minutes when midfielder Shane McGinty cut in from the left and fired a low drive from the edge of the box past Birdsall. But with less than hour an hour on the clock Ramblers were level again. Rocks was again the orchestrator as he set off on a mazy run down the left before cutting back for Stanton to clinically finish past Ciaran Gallagher for a goal on his home debut.

Ramblers hit the front just short of the hour when Stanton struck again, this time Eoin Hastings lofted a ball over the top and the striker did superbly to hold off two Finn Harps defenders before finishing confidently past Gallagher again.

Harps came close to an equaliser when Damien McNulty headed a corner over the bar with Pat McCann nearly scoring his second when his volley into the ground bounced just over the bar. But Ramblers held on for their first win over Peter Hutton’s side this season at the sixth attempt.